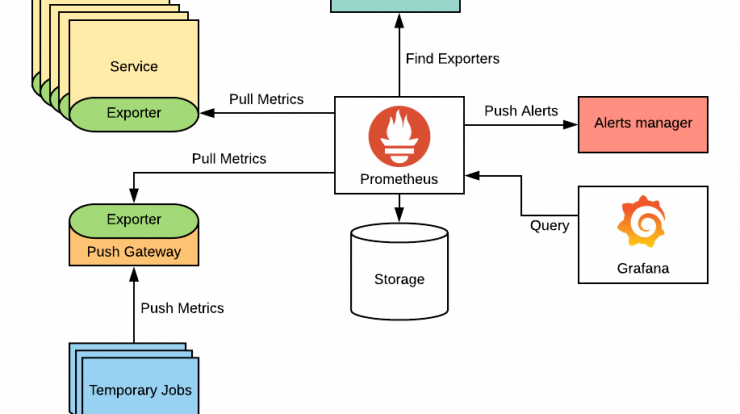 In Greek mythology, Prometheus, possibly meaning “forethought”), is a Titan god of fire. Prometheus is known for his intelligence and for being a champion of humankind, and is also seen as the author of the human arts and sciences generally.

What is Prometheus (software)?

What are the Prometheus Components?

A typical monitoring platform with Prometheus is composed of multiple tools:

Prometheus provides its own query language PromQL (Prometheus Query Language) that lets users select and aggregate data. PromQL is specifically adjusted to work in convention with a Time-Series Database and therefore provides time-related query functionalities. Examples include the rate() function, the instant vector and the range vector which can provide many samples for each queried time series. Prometheus has four clearly defined metric types around which the PromQL components revolve. The four types are

Occasionally you will need to monitor components which cannot be scraped. The Prometheus Pushgateway allows you to push time series from short-lived service-level batch jobs to an intermediary job which Prometheus can scrape.

Configuration for alerts can be specified in Prometheus that specifies a condition that needs to be maintained for a specific duration in order for an alert to trigger. When alerts trigger, they are forwarded to Alertmanager service. Alertmanager can include logic to silence alerts and also to forward them to email, Slack, or notification services such as PagerDuty. Some other messaging systems like Microsoft Teams[29] could be configured using the Alertmanager Webhook Receiver as mechanism for external integrations.

What can Prometheus do?
Using Prometheus, you can monitor application metrics like throughput (TPS) and response times of the Kafka load generator (Kafka producer), Kafka consumer, and Cassandra client. Node exporter can be used for monitoring of host hardware and kernel metrics.

What is the difference between Grafana and Prometheus?
Grafana is only a visualization solution. Time series storage is not part of its core functionality. … The way Prometheus stores time series is the best by far (thanks to its dimensional model, which uses key-value tagging along the time series to better organize the data and offer strong query capabilities)

Where is Prometheus data stored?
Prometheus stores its on-disk time series data under the directory specified by the flag storage. local. path . The default path is ./data (relative to the working directory), which is good to try something out quickly but most likely not what you want for actual operations.