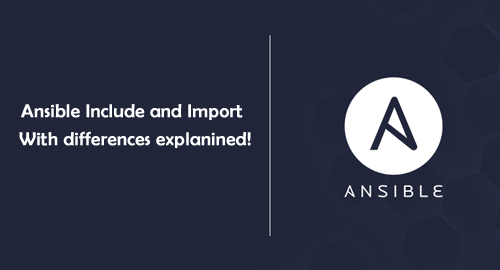 This is one of the most frequest questions being asked in my workshop is that differences between using import or include in Ansible. For example import_role or include_role, what should be behaviour and what to expect?

We know that include could be applied to tasks, plays and handlers. The bare include task (which was used for both Task files and Playbook-level includes) is still available, however it is now considered deprecated and introduced with include_tasks, include_role and include_role.

With filename variable substitution, the code could become much more clean.

We also know that include using(include and import) could be dynamic or static.

Differences Between Static and Dynamic

Ansible has two modes of operation for reusable content with Including and Importing and Roles: dynamic and static.

The main difference is:

Static import
If you use any import* Task (import_playbook, import_tasks, etc.), it will be static.

Dynamic Include
If you use any include* Task (include_tasks, include_role, etc.), it will be dynamic.

The two modes of operation are pretty simple:

When it comes to Ansible task options like tags and conditional statements (when:):

The primary advantage of using include* statements is looping. When a loop is used with an include, the included tasks or role will be executed once for each item in the loop.

Means, with include Running the Playbook which has list of tasks will execute until the error tasks are found, which is in included file.

On other end, Wait, with import, it will flag a error to begin with only. The reason is because the import_role task is pre-processed at the time playbooks are parsed. So it found the syntax error much earlier and so it never was able to even run our first task with the debug module.

This is an example that really emphasizes the fact that import is parsed quite early. This is what is referred to as static.

Ansible include and import has following module which must be explored

Ansible Fundamental tutorial by Manish in 2020

Ansible Advance Tutorial for Beginners with Demo 2020 — By DevOpsSchool