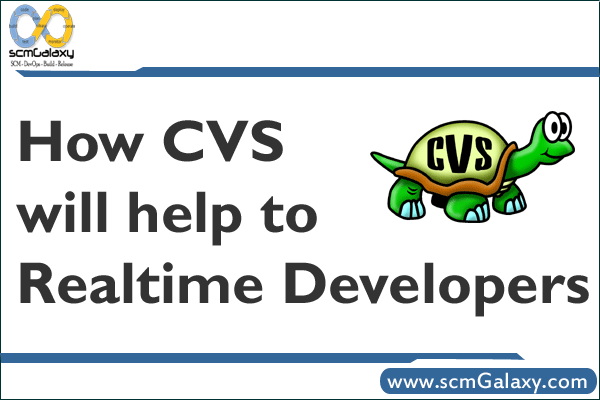 The CVS commands here assume that you are using the command line version of CVS. Tips and tricks for a specific CVS GUI are specific to each GUI and do not really belong here.

Show current status of a file.

The status command will show you the latest version, the version in your working directory and if your local copy has been modified.

After developers have checked in updates to the code it may be beneficial to see what has changed, either to help solve bugs or to track changes. There are several option to do this.

To retrieve the current version and other relevant information about a file run:

To retrieve the entire change log pertaining to a file run:

Retrieving CVS Files Based Upon Revision

To retrieve a file from CVS based upon a revision number perform the following:

Tag file in CVS as a Release

To tag files in CVS as a release perform the following:

I like to do the following before creating a branch:

See what tags are available and pick one.

Revert to a tagged version of HEAD.

To create a branch in CVS perform the following:

Run the command from within the release source dir. This should be done in the top level directory of the project. The chosen_branch is something like BRANCH_36_BUG_.

Reverting to a Branch

To revert to a branch in CVS perform the following:

Verifying you are in a branch

To verify you are in a branch

You will see that the branch is a sticky tag.

This will ensure that you are your branch is getting merged properly with HEAD so the only differences you see between your branch and the are changes that you made. You can verify this from your branch with:

You will eventually have to commit your changes you should always do a tag on the branch after your commit.

This command will unfortunenately result in a lot of your ID tags getting changed at the top. Using the –kk option will avoid this problem. But then you won’t see which files have changed and You won’t know who last modified a file easily. After you run this command I recommend:

You may find the following page interesting as well: http://kb.wisc.edu/middleware/page.php?id=4087

This will grab all of the conflicting files. You can save them with :w. And step through them with :bn. You can easily close them all with :wq!.

To merge current HEAD into a branch that has already had HEAD merged into it once, the differences between that last merge and current HEAD need to be gathered and applied to the branch. This is done by finding out when the last time HEAD was merged with the branch. Hopefully you tagged your branch. Repeat steps 1 and 2 from the previous section to create a tag for HEAD and to create a tag for your branch so you can have a backup/reference point. Then, perform the following if you have tagged the branch when merging the last time:

The reason for tagging the branch before a join/merge like this is to create a reference point to revert to if the need ever arises. The -kk option removes rcsid tags so that the cvs tag at the top doesn’t get flagged as a conflict on every merge/join.

Run the command from within the branched version.

causes cvs to use compression level 6.

Good links for it:-