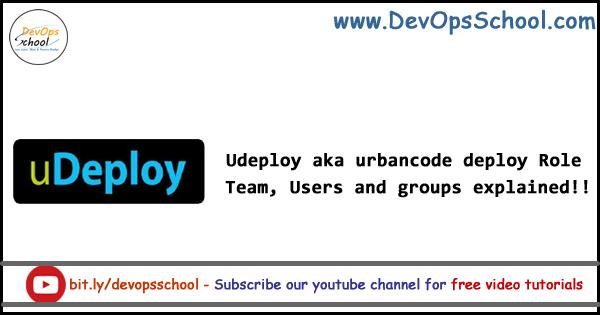 IBM UrbanCode products use a role- and team-based security system. Permissions are assigned to roles, not to users. In IBM UrbanCode Deploy, for instance, roleless users can only access their user preferences.

What is uDeploy Role?
A role is a list of permissions that users have on the IBM® UrbanCode™ Deploy server. These permissions include the ability to create, edit, and delete objects, such as applications, environments, and components. The permission also includes the parts of the server interface that users can access.

What is uDeploy Team?
Users and groups on the server are assigned roles when they are only added to teams.

When a user is added to a team, that person is assigned to one or more roles. Users cannot be added to a team unless they have a role assignment or to a role that does not have a team assignment.

Groups can also be added to roles, in which case all group members are granted the permissions that are defined for the role.

The System Team that comes with IBM® UrbanCode™ Deploy has all permissions granted for all Standard security types for its Administrator role.

What is uDeploy User?

Users can be created manually or imported from external systems, such as LDAP. Authentication is determined following the hierarchy of realms that is displayed on the Authentication tab.

What is uDeploy Group?

Use the Authorization Realms pane to create authorization realms and user groups for the server. Groups can be imported from external systems, such as LDAP.

Udeploy Tutorial for Beginners, Fundamental to Advance-Part 1/3
«
Prev
1
/
1
Next
»