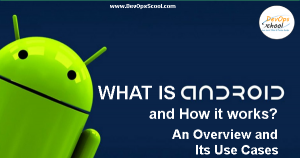 Android Inc. was founded in Palo Alto, California, in October 2003 by Andy Rubin, Rich Miner, Nick Sears, and Chris White. Rubin described the Android project as having “tremendous potential in developing smarter mobile devices that are more aware of its owner’s location and preferences”. The early intentions of the company were to develop an advanced operating system for digital cameras, and this was the basis of its pitch to investors in April 2004. The company then decided that the market for cameras was not large enough for its goals, and five months later it had diverted its efforts and was pitching Android as a handset operating system that would rival Symbian and Microsoft Windows Mobile.

Minimum requirements would depend on, and will mostly include testing and documentation of the following points:

Android is an open-source and Linux-based Operating System for mobile devices such as smartphones and tablet computers. Android was developed by the Open Handset Alliance, led by Google, and other companies. Android offers a unified approach to application development for mobile devices which means developers need only develop for Android, and their applications should be able to run on different devices powered by Android. The first beta version of the Android Software Development Kit (SDK) was released by Google in 2007 whereas the first commercial version, Android 1.0, was released in September 2008.

There are so many reasons you should choose the Android platform for mobile application development.

Disadvantages of an Android

2. What is the main Component of Android?

Ans: The main component of android are –

Services -> Used for Performing Background Task
Intent -> Passing Data from one Activity to another. Communicating between Activity.
Resources ->String and Graphs
Notification ->Used to send Notification in the form of DialogBox, AlertBox, and Toast
Content Providers->To share the Data Between Applications.

3. What are the Features of the Android OperatingSystem?

Ans: The main features of the Android operating system are –

Android is an Open-source. No need for Licensing. Distribution and development are Free.
Platform Independent which supports all Operating Systems Like Windows, Linux, Mac
It supports various Technologies like Camera, Bluetooth, Wifi, Speech
It uses a highly optimized virtual machine called DVM(Dalvik virtual machine).
Android Training in Pune guide you about Supports languages Like Java, Kotlin, c++
We can develop an App using Android Studio.

4. What is the Core building Block of Android?

5. What is the Role of AndroidManifest? XML File.

6. How many ManifestFiles are in Android?

Ans: We can have one or more Manifest.xml files in the Android studio.

7. What is Activity in Android?

Ans: Activity is a Single Screen of your Smartphone. It represents a Single window or Screen.

8. Which is the Parent class of the Android Application?

Ans: The Application class is the Base of All Android App. Which contains Activities and services. Its instance is created before any class when the process of Application is created.

Ans: Android is an open-source, Linux-based software created for touch screen devices. The main foundation of Android is Linux Kernel. It provides Android Run time (ART), It also provides services like Threading and Low-Level memory management.
Hardware Abstraction Layer(HAL): It provides standard interfaces that expose device hardware to a higher-level java API framework. HAL Consists of Library and Module for Camera, Bluetooth. Android System Loads Library Module for hardware component.
Android Runtime: In android, each App runs in its own process that is its own ART.ART is written to run multiple virtual machines on low memory devices by executing a DEX file.
DEX: IT is a bytecode format specially designed for Android.
Native C/C++ Library: To Provide System component and Service Some of the Libraries are written in c/c++.
Java API Framework: Android building block is JAVA API.

Some of the Main Features of JAVA API are:

View System: The entire UI we are designing in Layout using grid and textbox, etc is given by view System.
Resource Manager: It Provides Access to non-code data like strings, graphics, etc.
Notification Manager: This enables All Apps to display a custom status bar and alert.
Activity Manager: It Controls the Life Cycle of Activity.
Content Providers: For sharing data and one App can Access data of Another App. For working with Local storage and Remote Storage we use Content Providers.
System APP: Apart from JAVA API. A developer can also Access Some of the System App Like email, SMS, Contact, Default keyboards from the System App.

11. What is the view group in Android?

Ans: View Group is a special view that contains other views. View Group is Base for All Layouts. All Layouts Like Linear Layout, Relative Layout, Constrained Layout, Table Layouts. Arranging of Layout, size, Positioning is Available in view groups.

12. What is Permission in Android?

Ans: Every App in android runs on the limited-access sandbox. If App requires information beyond in its own sandbox. then App needs permission. To declare the permission use App manifest file. To Add Permission we declare elements in the manifest file.

Ans: Service is a Component that runs Background. The service doesn’t have any user interface. Since Services runs Background user can continue his foreground task. Generally, the user doesn’t know about the service. To implement a service we need to extend our class from Service Class.

14. what is Bundle in Android?

Ans: a Bundle is an object. It is used to pass data between Activities. The values are passed and Mapped to String keys. Which are used to retrieve the values from Key.