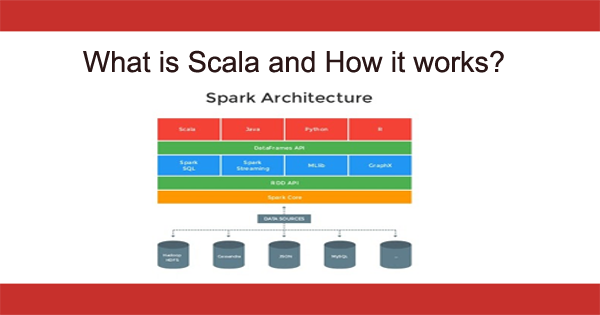 Scala stands for Scalable Language. It is a multi-paradigm programming language. Scala language includes features of functional programming and object-oriented programming. Scala is designed to interact well with mainstream platforms such as Java or C#. It shares with these languages most of the basic operators, data types, and control structures.

Scala is a general purpos

Scala is a general purpose programming language. Scala was created and envented by Martin Odersky. The design of the language started in 2001 and was released to the public in early 2004. At JavaOne conference in 2012, Scala was awarded as the winner of the ScriptBowl contest. From June 2012, Scala doesn’t provide any support for .Net Framework. The latest version of scala is 2.12.6 which released on 27-Apr-2018.

Scala offers the magic of implicit conver‐sions, String instances also have access to all the methods of the StringOps class, so you can do many other things with them, such as treating a String instance as a sequence of characters.

As a result, you can iterate over every character in the string using the
foreach method:

You can treat a String as a sequence of characters in a for loop:
scala> for (c <- “hello”) println(c)

Use case of Scala

Feature and Advantage of using Scala

Interview Questions and Answer for Scala

Write a few Frameworks of Scala

What are the four types of scala identifiers ?

The four types of identifiers are

Scala is a language that’s a bit difficult to learn. Now i’m going to describe about Scala Job Opportunities for you in future, what is the Scala programmer salary, work profile, top organizations using Scala, etc.

A software engineer deals with:

A very efficient Scala tutorial,also a good learning resource on How SCALA works and its use cases. Would love to hear more about Spark and Scala together.

First of all thanks a lot for describing the advantage of SCALA. I have a personal request, can you please make a tutorial series which can cover the below topic. I think it will be very helpful for people who want to go to long way with SCALA.
1. Introduce with scala play framework.
2. Integration play with a different database.
3. Integration unit test.
4. Play dependency injection.
5. Play user management with secured action.
6. With a custom library and those in play project
7. Set play and spark together.
8. Call spark process from play.
9. etc
Thanks

Scala is a strong statically typed general-purpose programming language which supports both object-oriented programming and functional programming. Designed to be concise, many of Scala’s design decisions are aimed to address criticisms of Java.