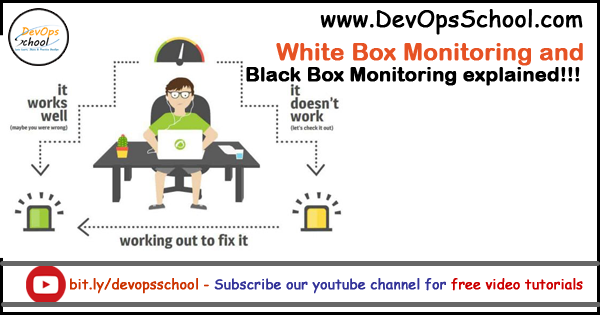 There are some basic principles and best practices for building successful monitoring and alerting systems.

What is White Box Monitoring?
White box monitoring is the monitoring of applications running on a server. Monitoring based on metrics exposed by the internals of the system, including logs, interfaces like the Java Virtual Machine Profiling Interface, or an HTTP handler that emits internal statistics. Other types of white box monitoring include:

The advantages of Black Box Monitoring:

What is Black Box Monitoring?

Black box monitoring refers to the monitoring of servers with a focus on areas such as disk space, CPU usage, memory usage, load averages, etc. Testing externally visible behavior as a user would see it. These are what most in the industry would deem as the standard system metrics to monitor. Other types of black box monitoring include:

There are differences between these two types of monitoring. Traditionally, systems administrators would take care of both white and black box monitoring; however, with the advent of DevOps and modern changes in the IT industry, we’re increasingly finding that application developers are taking responsibility for the monitoring of the applications (white box) they’re writing and as a result, are building monitoring solutions or writing checks for monitoring systems deployed by DevOps engineers.