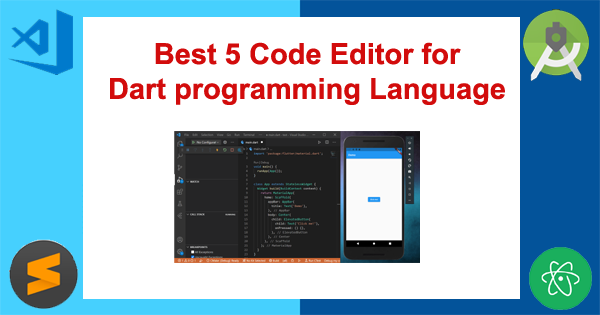 In this tutorial im going to share top and best 5 code editor for dart programming language. These code editor is very helpful for developers.

What is Visual Studio Code?

Visual Studio Code is one of the most popular code editor for dart flutter it’s made by Microsoft. Visual Studio code has lots of extra features as like debugging, syntax highlighting, intelligent code completion snippets and etc.  VS Code supports a wide array of programming languages from Java, C++, and Python to CSS, Go, and Dockerfile. Moreover, formatting and much more. VS Code allows you to add on and even creating new extensions including code linters, debuggers, and cloud and web development support.

Atom is a free and open-source text and source code editor for Dart macOS, Linux, and Microsoft Windows with support for plug-ins written in JavaScript, and embedded Git Control. It’s made by GitHub, Atom is a desktop application built using web technologies, Atom is a free text code editor which is free and provided by GitHub which is owned Now by Microsoft.

Geany is a strong, steady and lightweight developer’s text editor that gives huge loads of helpful highlights without hindering your work process. It runs on Linux, Windows and macOS is available  40 languages, and has built-in support for more than 50 programming languages.  Geany work Many supported filetypes including popular programming languages like C, Java, PHP, HTML, JavaScript, Python or Perl.

5. IntelliJ IDEA. (and other JetBrains IDEs)

IntelliJ IDEA is an Integrated Development Environment (IDE) for JVM languages designed to maximize developer productivity. It does the routine and repetitive tasks for you by providing clever code completion, static code analysis, and refactorings, and lets you focus on the bright side of software development, making it not only productive but also an enjoyable experience.

In this video you can see lots of code editor whose helpful for dart.