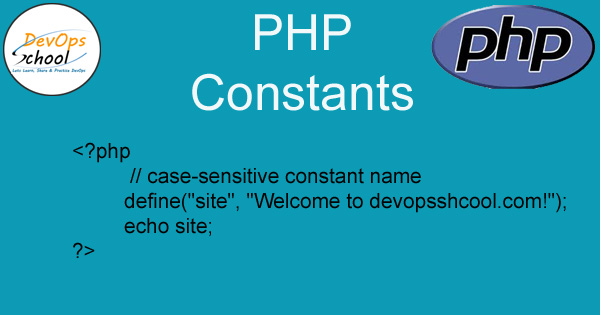 In this Tutorial, we are going to learn about Complete Tutorials of PHP OOP Constants with Example code. Through this we will learn about the concept about Constants.  But first let me give you a brief explanation of what is Object-oriented programming (OOP)?

What is Object-oriented programming (OOP)?

Object-oriented programming consists of combining a set of variables (properties) and functions (methods), which are referred to as an object. These things are arranged into classes in which individual items can be combined. OOP can enable you to consider the objects and the many activities in connection with the objects in a program’s code. For more details you can go on my previous article Read More. [Object-oriented programming (OOP) Concept Simplified!]

What is Constants in PHP?

A constant is a variable that cannot be modified, exactly as the name indicates. If you define a constant, you assign it a value, and the value never changes thereafter. Simple variables are normally easier to operate, but, in certain situations, constants, such as signals to other programmers (or yourself, should you forget), are preferred not to modify this particular value while running.

Class constants are similar to normal constants, except that they are defined in a class and accessible through this particular class. You use the double-colon operator to access a constant class, as with static members.

A class constant is declared inside a class with the const keyword.

Which are the points we have to know about the Constants?

How to create a PHP Constants?

The define() function in PHP is used to create a constant

There are some of The parameters are as follows:-

In the program above, just two parameters are provided to define(). Optionally, the define() provides a third parameter to set a constant’s case insensitivity. The constants are sensitive to cases by default.

The constant() function in PHP

Another technique to output constants using the constant() function is not to use the echo statement.

PHP constant() is employed as an input for this method to retrieve the value of the constant. The sample code below use constant() to obtain the constant value by using the identification.

A construct in which define() is a function is a PHP const. In order to initialize constants, we need use the static name and value with a const statement where define() permits interpolation and function calling while declaring the constant. This constriction is always case sensitive, specified in this construct.

Setting constants with const is beneficial in the aspect of readability; nevertheless, define() has several functions, which enables case sensitivity, allowing function call values to be assigned to the constant, which reveals constants at runtime.

The following line illustrates a const statement as an example of initialization.

Use the const keyword to define a class constant. Use the visibility modifier keywords, including public, protected, and private. By default, a class constant is public. we have learnt many basic concept of Constant concept in PHP. Hope you have Enjoyed this. Thank you.