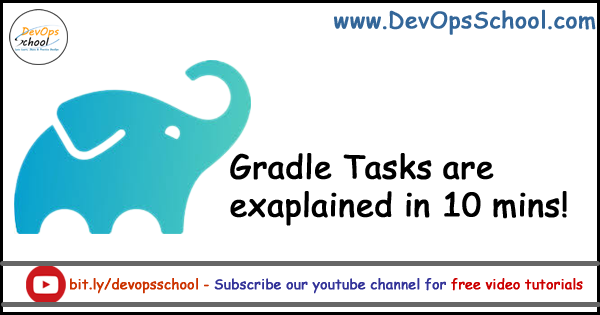 Task in Gradle is a code that Gradle execute.

Everything such a each type features is powered in Gradle using Plugin. Plugins add new tasks domain objects (e.g. SourceSet), conventions (e.g. Java source is located at src/main/java) as well as extending core objects and objects from other plugins. Thus, Gradle plugins define a set of tasks, DSL extensions, and conventions which can be reused across projects.

There are 2 types of plugins.

Thus, plugins manages everything in Gradle sits on top of two basic concepts: projects and tasks. Each gradle build script would have

A task, as the name suggests, is a representation of actions (default or custom) that need to be executed during the build process. For example, the compilation of Java code is started by a task. Tasks are defined in the project build script and can have dependencies with each other. this, A Task represents a single atomic piece of work for a build.

What are different ways to declare Gradle Tasks?

Example 1 – Sample Task has description and action and method

Example 2 – Task has description and action and method

What does -q do?
Most of the examples in this user guide are run with the -q command-line option. This suppresses Gradle’s log messages, so that only the output of the tasks is shown.

Example 8. Declaration of task that depends on other task

Example 9. Lazy dependsOn – the other task does not exist (yet)

Example 10. Dynamic creation of a task

Example 11. Accessing a task via API – adding a dependency. Once tasks are created they can be accessed via an API. For instance, you could use this to dynamically add dependencies to a task, at runtime.

Example 16. Defining a default task. Gradle allows you to define one or more default tasks that are executed if no other tasks are specified.