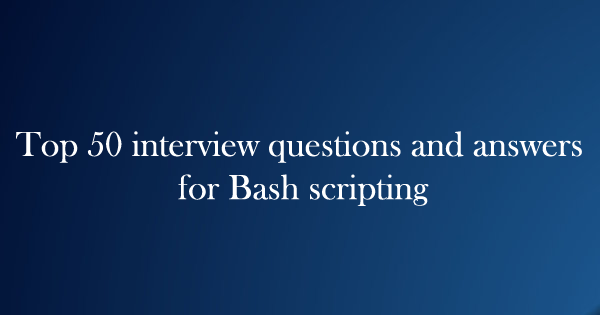 In computer programing, a script could be a set of commands for an applicable run time atmosphere that is employed to alter the execution of tasks.

A Bash Shell Script could be a plain document containing a group of assorted commands that we have a tendency to typically sort within the command. Its accustomed alter repetitive tasks on UNIX system filesystem. It would embody a group of commands, or one command, or it would contain the hallmarks of imperative programming like loops, functions, conditional constructs, etc. Effectively, a Bash script could be a bug written within the Bash artificial language.

We had discussed the bash, script and bash scripting. Now, let’s move on to the FAQ’s and interview questions of Bash scripting.

The bash script is a shell programming language. Generally, we run many types of shell commands from the terminal by typing each command separately that require time and efforts. If we need to run the same commands again then we have to execute all the commands from the terminal again. But using a bash script, we can store many shell command statements in a single bash file and execute the file any time by a single command. Many system administration related tasks, program installation, disk backup, evaluating logs, etc. can be done by using proper bash script.

2. What are the advantages of using bash scripts?

Bash script has many advantages which are described below:

3. Mention the disadvantages of bash scripts

Some disadvantages of bash script are mentioned below:

4. What types of variables are used in bash?

Two types of variables can be used in bash script. These are:

The variables which are pre-defined and maintained by the Linux operating system are called system variables. These type of variables are always used by an uppercase letter. The default values of these variables can be changed based on requirements.

5. How to declare and delete variables in bash?

6. How to add comments in a bash script?

7. How can you combine strings in a bash script?

String values can be combined in bash in different ways. Normally, the string values are combined by placing together but there are other ways in bash to combine string data.

# Print string together with space

#Combine all variables and store in another variable

#Combine other string data with the existing value of the string

8. Which commands are used to print output in bash?

9. How to use command-line arguments in bash?

#Check any argument is provided or not

echo “No argument is given.”

# Print the argument with other string

10. What are the advantages and disadvantages of Bash Scripting?

11. Explain about “s” permission bit in a file?

“S” bit on a file causes the process to have the privileges of the owner of the file during the instance of the program.

For example, executing “passed” command to change current password causes the user to writes its new password to shadow file even though it has “root” as its owner.

12. Create a directory such that anyone in the group can create a file and access any person’s file in it but none should be able to delete a file other than the one created by himself.

We can create the directory giving read and execute access to everyone in the group and setting its sticky bit “t” on as follows:

13. How can you find out how long the system has been running?

We can find this by using the command “uptime”.

14. How can any user find out all information about a specific user like his default shell, real-life name, default directory, when and how long he has been using the system?

These are the processes which have died but whose exit status is still not picked by the parent process. These processes even if not functional still have its process id entry in the process table.

17. How will you copy a file from one machine to other?

We can use utilities like “ftp,” “scp” or “rsync” to copy a file from one machine to other.

18. I want to monitor a continuously updating log file, what command can be used to most efficiently achieve this?

We can use tail –f filename. This will cause only the default last 10 lines to be displayed on std o/p which continuously shows the updating part of the file.

19. I want to connect to a remote server and execute some commands, how can I achieve this?

We can use ssh to do this:

Once above command is executed, you will be asked to enter the password

20. I have 2 files and I want to print the records which are common to both.

We can use tail –f filename. This will cause only the default last 10 lines to be displayed on std o/p which continuously shows the updating part of the file.

21. I want to connect to a remote server and execute some commands, how can I achieve this?

We can use ssh to do this:

22. I have 2 files and I want to print the records which are common to both.

We can use “comm” command as follows:

23. Write a script to print the first 10 elements of Fibonacci series.

24. How will you connect to a database server from Linux?

We can use isql utility that comes with open client driver as follows:

25. What are the 3 standard streams in Linux?

26. I want to read all input to the command from file1 direct all output to file2 and error to file 3, how can I achieve this?

27. What will happen to my current process when I execute a command using exec?

E.g., Executing “exec ls” on command prompt will execute ls and once ls exits, the process will shut down

29. Given a file find the count of lines containing the word “ABC”.

30. What is the difference between grep and egrep?

31. How will you print the login names of all users on a system?

32. How will you print the login names of all users on a system?

34. How will you find the total disk space used by a specific user?

du -s /home/user1 ….where user1 is the user for whom the total disk space needs to be found.

35. Write the syntax for “if” conditionals in Linux?

36. How do we delete all blank lines in a file?

38. Write a command sequence to find all the files modified in less than 2 days and print the record count of each.

39. How can subroutines be declared and called in bash?

In bash a function or procedure is called a subroutine. The declaration and calling of a subroutine in bash is different from other languages. No argument can be declared in subroutines unlike other standard programming languages.  But local variables can be defined within the subroutine by using the ‘local’ keyword.

40. How to cut and print some part of a string data in bash?

Bash has no built-in function like other languages to cut some portion of the string data. But using parameter expansion any string value can be cut in bash. Three parts can be defined in parameter expansion by separating with a colon to cut any part of the string data. Here, the first two parts are mandatory and the last part is optional. The first part contains the main string variable that will be used to cut, the second part is the starting position from where the string will be cut and the third part is the length of the cutting string. The starting position must be counted from 0 and the length must be counted from 1 of the main string to retrieve the cutting value.

41. Mention some ways to perform arithmetic operations in bash?

42. How to check a directory exists or not using bash?

43. How can a bash script be terminated without executing all statements?

Using ‘exit’ command, a bash script can be terminated without executing all statements. The following script will check if a particular file exists or not. If the file exists, then it will print the total characters of the file and if the file does not exist then it will terminate the script by showing a message.

44. What are the uses of break and continue statements in bash?

45. How to make a bash file executable?

Executable bash files can be made by using ‘chmod’ command. Executable permission can be set by using ‘+x’ in chmod command with the script filename. Bash files can be executed without the explicit ‘bash’ command after setting the execution bit for that file.

46. What is meant by ‘bc’ and how can this command can be used in bash?

47. How can you print a particular line of a file in bash?

IFS is a special shell variable. The full form of IFS is Internal Field Separator,

it acts as delimiter to separate the word from the line of text. It is mainly used for splitting a string, reading a command, replacing text etc.

49. How to find out the length of a string data?

The uses of the above commands are shown in the following script.

50. How to run multiple bash script in parallel?

This article has all the interview questions and answers of Bash scripting. All the possible FAQ’s are mentioned for the readers. If you are one of them who wants to make their career in bash scripting and want to become a bash script programmer in future, then you can vist devopsschool website for better options.