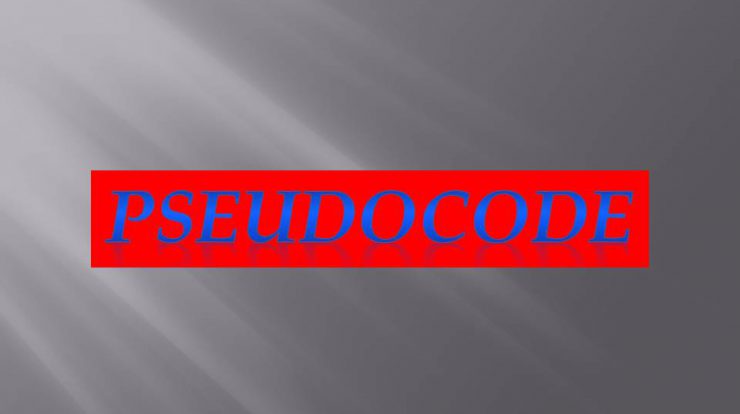 Pseudocode is an informal manner of explanation of programming which does not need a rigid syntax of language or technical aspects. It is used to create a contour or an approximate draught of a program. Pseudocode describes the flow of a program and excludes the underlying information. System designers generate pseudo code to ensure programmers comprehend and align code with the needs of a software project.

Pseudocode is a word widely used in algorithm-based professions and in programming. It is a way that enables the programmer to represent an algorithm’s implementation. We could just claim it’s a cooked algorithm representation. Algorithms are often expressed as pseudo codes because they may be read by programmers regardless of their experience and background. As the name implies, pseudo code is a bogus code or code representation that even a lawyer with little experience of the programming of school level may understand.

Which are the Things we have to focus in Pseudocode?

It is essentially an algorithm that is stated in plain English in the form of annotations and information. It has no programming language-like grammar and hence cannot be compiled or constructed by the computer. Now, you think what is Algorithm, An ordered logical series of events or a particular issue approach is the algorithm. To solve a problem, a programmer implements an algorithm. Algorithms are expressed using natural, yet somewhat technical, linguistic comments.

What are the Advantages of Pseudocode?

What are the Disadvantages of Pseudocode?

Why Pseudocode is Important?

Pseudocode is not a real language of programming. It can not thus be compiled into a software executable. It is used to construct code for programmes in brief phrases or basic English syntaxes prior to it becoming a certain programming language. This is done to identify the flow errors in the highest possible level and comprehend the data flows that will be used by the final software. This helps undoubtedly to save time when conceptual problems are already fixed during real programming. To get the desired results for a program, you first gather the program description and functionality, then use pseudo code for creating statements. Detailed pseudocode is evaluated and validated according to design standards by the design team or programmers. Catching faults or incorrect program flows during the phase of pseudo code creation is useful since it is cheaper than catching them afterwards. Once the team accepts the pseudo code, it is written in a programming language using vocabulary and grammar. An effective core concept of an algorithm is the goal of employing pseudocode. It is used in the design of an algorithm with an outline of the program’s structure before coding.

How to write a Pseudocode?

Example:- let’s take an Example and have a look at the code

This article shows the complete information and tutorial about the Pseudocode. What is Pseudocode, which are the advantage and disadvantage of Pseudocode, how to write and why Pseudocode is important which is very important to know about Pseudocode. Pseudocode is a very simple topic to understand but many problem were came if you don’t know the basic concept of Pseudocode. I hope this article is helpful for you, all the things which I have mention that is my real experience which I have faced during my learning period so I thought I have to share my experience. Hoping this one is helpful for you. Thank you.