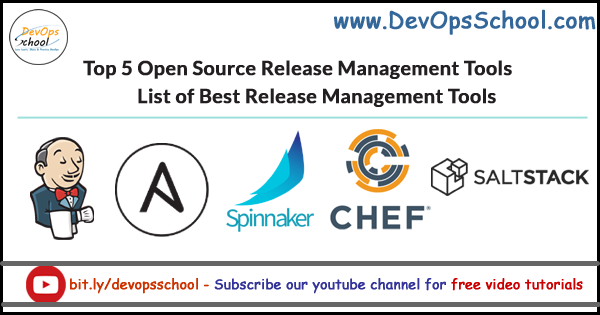 Release management tools help teams plan and manage the handover of code, changes, and customizations from the application team through packaging and deployment across testing environments on the operations side, all the way through risk analysis, impact assessment, and successful deployment to production environments.

What is Release management

Release management is the process of managing, planning, scheduling and also controlling the whole process of building a software via various stages of development and environments – such as testing and deploying software releases.

The practice of release management combines the general business emphasis of traditional project management with a detailed technical knowledge of the systems development life-cycle (SDLC) and IT Infrastructure Library (ITIL) practices.

So here I have put together this list to help you make informed decision. With no further delay, we can get into the next section where these are going to be discussed in detail.

Jenkins is one of the most popular tool for Continuous integration but it can be used as a release management software. This software is written in java and it was initially released in the year 2011. Jenkins is highly customizable due to its extensible plugin environment and its integrations with Git source control repositories like GitHub. Jenkins helps release managers source the code, organize the release and keep deployments on schedule – all in one single place.

Ansible is open-source configuration management tool, similar to Puppet and Chef. It is primarily intended for IT professionals, who use it for application deployment, updates on workstations and servers, cloud provisioning, configuration management, intra-service orchestration, and nearly anything a systems administrator does on a weekly or daily basis. Ansible also integrates with a large number of other tools that DevOps teams are already using such as Jira, ServiceNow, Jenkins and Git.

Spinnaker is a Cloud Deployment Tool developed by Netflix and recently it is Open Sourced. The primary purpose or goal of Spinnaker is to make reliable deployments. It is a powerful tool that can help streamline application deployment in an automated repeatable fashion with the ability to build best practice into the pipeline. It can be deployed across multiple cloud providers like AWS EC2, Kubernetes, Google Compute Engine, Google Kubernetes Engine, Google App Engine, Microsoft Azure, Openstack, Cloud Foundry, and Oracle Cloud Infrastructure

Chef is an open-source CI/CD tool for DevOps and IT operations teams looking to automate and orchestrate releases in nearly any environment – traditional or cloud native. Through improved transparency and automation, Chef ensures the security, compliance, speed and reliability of all your applications and infrastructure. An easy-to-use web interface allows DevOps teams to keep track of all current and previous release details. So, in one single place, Chef allows DevOps and IT teams to configure, orchestrate and maintain a continuous cadence of reliable service releases.

SaltStack is an intelligent IT automation platform that can manage, secure, and optimize any infrastructure—on-premises, in the cloud, or at the edge and highly-effective open-source release management tool which is written in Python. SaltStack is a great DevOps release tool because it helps you coordinate cross-functional teams, manage development branching, automate testing and deployment, and organize all of your release schedules and cadences. SaltStack automates repeated system administrative and code deployment tasks, eliminating manual processes in a way that can reduce errors that occur when IT organizations configure systems.

Vikas K
Contact me at contact@DevOpsSchool.com for any query.