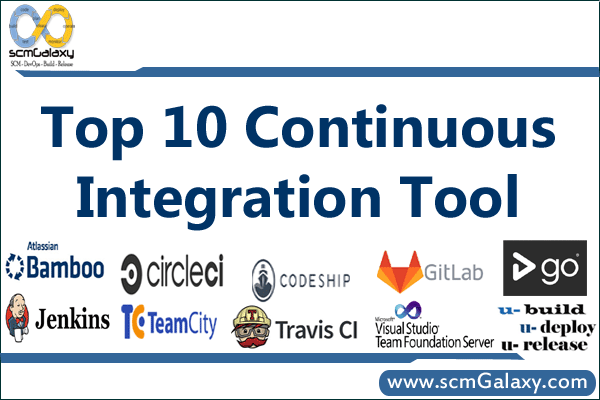 Your product ideas may be the greatest of all time, but without delivering well and delivering often, it may be extremely hard to keep up with the competition. So came Continuous Integration which is inclined towards adoption of a more refined programming practice, which aims to help developers with preventing serious integration pitfalls. As you continue to build your project, there are more things to integrate, and back-tracking can quickly become a time-consuming chore. CI Tools automate many tedious tasks and make it easier to quickly backtrack before you end up releasing a product with lots of bugs.

What is Continuous Integration?

Continuous Integration (CI) is the practise that enhances the quality of the code. It is a software engineering method that merges all developers working copies in a shared manner and environment. The main objective of Continuous Integration is to provide rapid feedback when any defect is found in the code base and correct it as soon as possible. It automates the testing process on a server and provides automatic reporting to the user. Continuous Integration utilizes a centralized server which continuously monitors and pulls in the changes done in the source code.

What is CI process?

CI involves software developers integrating their changes in a source repository, building the combined software, and testing that it works. Generally, they use a CI server or hosted CI tool to do this, and the process requires self-testing code. CI is a feedback loop that helps teams get better and verify their code.

How to get started with continuous integration?

It’s really easy to get you up and running with the right continuous integration service. Here’s a really short list of basics you need to get started with CI.

Why is Continuous Integration Important?

CI is extremely important for DevOps teams who need to work at a fast pace and get feedback at regular intervals to discover bugs and regressions. Continuos integration helps in reducing risks for each build and clearing the way to get your valuable features out to customers faster.

There exist several CI tools, depending on the requirement the tools can be selected. Now let’s quickly move on to the list where, we’ve rounded up top 10 leading tools and software in the field of Continuous Integration.

Jenkins is number one open-source automation server in which the central build and continuous integration process take place. It is a self-contained Java-based program with packages for Windows, macOS, and other Unix-like operating systems. With hundreds of plugins available, Jenkins supports building, deploying, and automating for software development projects. Common uses include building projects, running tests, bug detection, code analysis, and project deployment.

Introduction (Get started with Jenkins)

Bamboo is a CI server being used by software teams across the globe to automate the process of release management for applications and general software, allowing teams to establish a streamlined pipeline of build delivery. Bamboo covers building and functional testing, assigning versions, tagging releases, deploying and activating new versions on production.

Getting Started with Atlassian Bamboo – Continuous Delivery in Action

TeamCity from Jetbrains is an intelligent CI server solution for software environments of all sizes. With an ample amount of features integrated specifically for developers. TeamCity runs in a Java environment and integrates with Visual Studio and IDEs. The tool can be installed on both Windows and Linux servers, supports .NET and open-stack projects. It also supports GitLab and Bitbucket server pull requests.

CircleCI is a CI/CD tool that supports rapid software development and publishing. CircleCI allows automation across the user’s pipeline, from code building, testing to deployment. It also runs in an environment such as cross-platform mobile app, Python API server or Docker cluster. You can integrate CircleCI with GitHub, GitHub Enterprise, and Bitbucket to create builds when new code lines are committed.

Buddy is a smart CI/CD tool for web developers designed to lower the entry threshold to DevOps. It uses delivery pipelines to build, test and deploy software. The pipelines are created with over 100 ready-to-use actions that can be arranged in any way – just like you build a house of bricks.

Travis CI is a CI platform that automates the process of software testing and deployment of applications. It’s built as a platform that integrates with your GitHub projects so that you can start testing your code on the fly. With customers like Facebook, Mozilla, Twitter, Heroku, and others, it’s one of the leading continuous integration tools on the market.

GoCD is an open-source tool to build and release software that supports modern infrastructure on CI/CD. It is ideal for automating and streamlining your cycle of builds, tests, and production releases. Built for individual teams and growing businesses alike, GoCD provides a business continuity concept that lets you set up multiple servers to keep your data available in the case of an emergency.

Wercker can be a suitable choice for developers who are working with or are considering starting a new project based on Docker. Wercker supports organizations and their development teams to work with CI/CD, microservices, and Docker. Using container-specific and cloud-native automation features, teams can test and deploy their apps hassle-free.

Get Started with Wercker UI

Nevercode is a cloud-based CI and CD server that automates the process of building, testing and distributing mobile applications. It requires zero assistance from human personnel, making it highly flexible and reliable at the same time. It helps build, test, and release both native and cross-platform apps faster.

The above list of best Continuous Integration tools describes each of the ten tools in detail and covers the best of all along with their main features. This information is insightful for those who still haven’t thought of inculcating these automation tools to build and deploy various aspects of the Software development projects. As the CI CD continues to grow and evolve, it leaves the innovators with more chances to explore on creating the best versions of such tools.