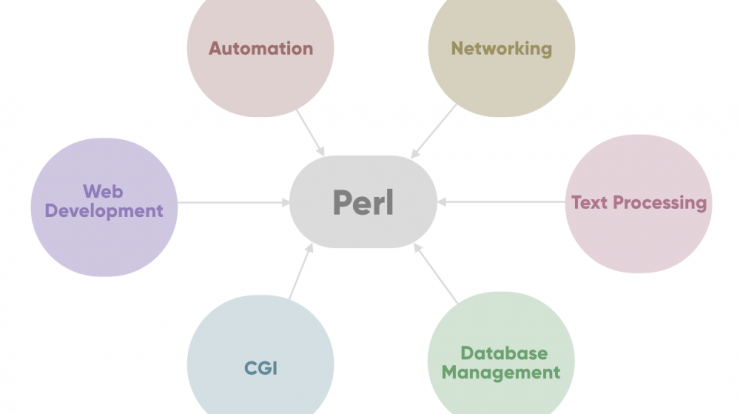 Hey, this is Ashwani, and in this article I’m going to share some important things about Perl. As you see in the heading everything is clear to your mind that what I m going to cover in the article such as What is Perl, How it works, Overview and Its Use Cases. So, lets Start the Topic.

Perl is a family of script programming languages with a syntax that is comparable to C. It’s an older interpreted language that’s free source and intended for broad usage.

Perl was created with ease of use in mind. Its efficient architecture enables developers to do a lot with a small amount of code. It’s been dubbed the internet’s “Swiss Army chainsaw.”

Perl is a high-level interpreted and dynamic programming language that may be used for a variety of tasks. Larry Wall came up with the idea in 1987. Perl does not have an official full form, although the most often used expansion is “Practical Extraction and Reporting Language.” Perl is also known as the “Pathologically Eclectic Rubbish Lister” or “Practically Everything Really Likable” by certain programmers. Because Perl was initially designed for text processing, such as extracting essential information from a specific text file and transforming the text file into a new format, the acronym “Practical Extraction and Reporting Language” is often used.

Perl is a scripting language that is pretty simple, well-known, and well-respected. It may be used for a number of purposes (for example, creating the equivalent of DOS batch files or C shell scripts), but it is most commonly used in Web development to construct CGI scripts.

People give out source code for their applications since Perl is a scripting language, which is one of the good things about it. This allows you to learn Perl by doing, as well as download and alter tens of thousands of Perl scripts for your own usage. One of the disadvantages of Perl is that most of the free code is incomprehensible. Perl lends itself to a bizarrely opaque writing style!

Once you understand the basics, Perl is simple to use. In this post, we’ll start at the beginning and show you how to use Perl to do the most typical programming tasks. You’ll be able to write your own Perl scripts with reasonable ease by the conclusion of this essay, and read cryptic programmes published by others with a little less easily, but it’ll be a solid start.

You’ll need the Perl interpreter to get started with Perl. There’s a 99.99 percent chance it’s already installed on any UNIX computer. You must download and install the most recent version of the language on your Windows or Mac laptop. (For further information, see the links at the end of this page.) Perl is a free programming language that is freely available on the Internet.

Next, check through the DOCS directory that comes with Perl; there should be user-manual-type material there. It wouldn’t hurt to go through or at least scan all of the documentation at some time. It will be inconvenient at first, but after reading this post, it will make a lot more sense.

Once Perl is installed, double-check that your path is set to contain the Perl executable. Then, using a text editor, make a text file. Insert the following line into the file:

The code in the text file will be run and executed by Perl. The phrase “Hello World!” should be printed to stdout (standard out). As you can see, writing and running programmes in Perl is a breeze. (If you’re using UNIX, you may add a comment like #! /usr/bin/perl to the first line to avoid having to write “perl” at the command line.)

The print command sends information to stdout. A line feed is indicated by the n notation. If you changed the test programme to look like this (# marks a remark), it would be clearer:

In Perl, variables are fascinating. You don’t declare them, and you constantly refer to them with a $. They are created when they are first used. Consider the following scenario:

You may make a basic for loop in the same way you would in C:

While statements are simple:

If statements are similarly simple:

The term sub is used to construct a subroutine. The procedure receives all variables in an array named . As a result, the following code is valid:

Remember that $# returns the array’s greatest index (the number of elements minus 1), thus $# equals the number of arguments minus 1. If you enjoy that kind of obscurity, you’ll enjoy PERL.

The term local can be used to define local variables in a subroutine, as in:

You may also use & to run a function, as in:

Although the & sign is only necessary when there is uncertainty, some programmers use it frequently.

The keyword return is used to return a value from a procedure.

Although the & sign is only necessary when there is uncertainty, some programmers use it frequently.

The keyword return is used to return a value from a procedure.

What are the features of Perl?