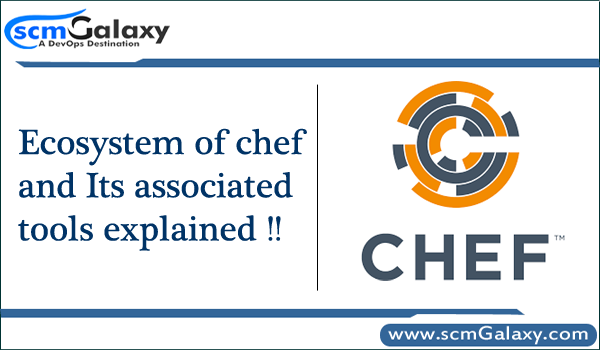 Some other tools which can be used along with Chef

Some other chef & Knife tools

Chef Apply
chef-apply is an executable program that runs a single recipe from the command line. Is part of the Chef development kit. A great way to explore resources

Ohai
Ohai is a tool that is used to collect system configuration data, which is provided to the chef-client for use within cookbooks. Ohai is run by the chef-client at the beginning of every Chef run to determine system state. Ohai includes many built-in plugins to detect common configuration details as well as a plugin model for writing custom plugins.

Chef
The chef executable is a command-line tool which Generates applications, cookbooks, recipes, attributes, files, templates, and custom resources (LWRPs) and Ensures that RubyGems are downloaded properly for the chef-client development environment along with Verifies that all components are installed and configured correctly

Knife
knife is a command-line tool that provides an interface between a local chef-repo and the Chef server. knife helps users to manage Nodes, Cookbooks and recipes, Roles, Environments, and Data Bags, Resources within various cloud environments, The installation of the chef-client onto nodes, Searching of indexed data on the Chef server

Chef Client
The Chef client works with the Chef server to bring nodes to their desired states with policies you provide as recipes. The chef-client executable can be run as a daemon. A chef-client is an agent that runs locally on every node that is under management by Chef. When a chef-client is run, it will perform all of the steps that are required to bring the node into the expected state, including:

Chef Server
The Chef server makes it easy to automate your infrastructure, manage scale and complexity, and safeguard your systems.

Chef Server has following tools which should be running…

InSpec
InSpec is an open-source testing framework for infrastructure with a human- and machine-readable language for specifying compliance, security and policy requirements.

Push Jobs Client
The Push Jobs client communicates with the Push Jobs server, which extends the Chef Server to allow you to execute commands across hundreds or even thousands of nodes in your Chef-managed infrastructure.

Push Jobs Server
The Push Jobs server add-on, along with its associated client, extends the Chef Server to allow you to execute commands across hundreds or even thousands of nodes in your Chef-managed infrastructure.

Supermarket
Supermarket is an artifact repository that makes it easy to browse, use, and share communal cookbooks and tools within your organization.

Chef Automate
One platform with a unified workflow, end-to-end visibility, and automated compliance over your entire Chef ecosystem.

Chef Compliance
Assess and monitor infrastructure compliance and use InSpec compliance profiles to validate that production servers are properly configured.

Kitchen or Test Kitchen
kitchen is the command-line tool for Kitchen, an integration testing tool used by the chef-client. Kitchen runs tests against any combination of platforms using any combination of test suites. Each test, however, is done against a specific instance, which is comprised of a single platform and a single set of testing criteria.

“Test Kitchen is an integration tool for developing and testing infrastructure code and software on isolated target platforms.” It creates test machines, converges them, and runs post-convergence tests against them to verify their state. Test Kitchen is written in Ruby. It has a plugin system for supporting machine creation through a variety of virtual machine technologies such as vagrant, EC2, docker, and several others. Test Kitchen makes it easy for Chef developers to test cookbooks on a variety of platforms. It uses busser to install post-convergence integration test tools such as Serverspec or BATS that actually perform the tests.

foodcritic
Foodcritic is a helpful lint tool you can use to check your Chef cookbooks for common problems.
http://www.foodcritic.io/

RuboCop
Rubocop is a Ruby command-line tool that performs lint and style checks based on the community driven Ruby Style Guide. It performs static analysis of any Ruby code, which includes Chef recipes, resources, library helpers, and so forth. Rubocop can be configured via .rubocop.yml to exclude certain rules, and it can be run with “–lint” to perform only lint checking, excluding all style checks. Rubocop is used in the Chef community in cookbooks to make contributions more consistent and easier to manage.

Serverspec
Serverspec is an “outside-in” integration test framework. It is platform and tool agnostic, and is used by other configuration management systems to verify systems are configured as desired. It checks the actual state of the target node by executing commands locally, via SSH, via WinRM, or other remote transports. Serverspec is implemented in RSpec, and uses RSpec test syntax.