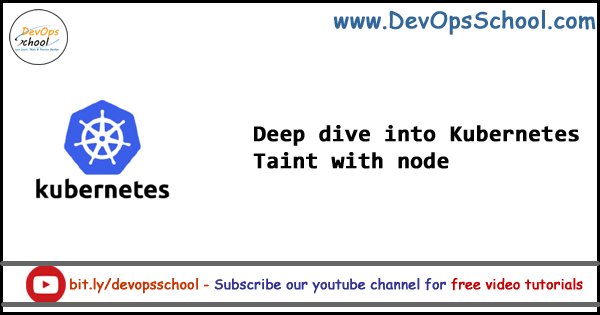 Follwing are workload which run in a cluster’s node….

When you submit a workload, The scheduler determines where to place the Pods associated with the workload. The

scheduler is free to place a Pod on any node that satisfies the Pod’s CPU, memory, and custom resource

If your cluster runs a variety of workloads, you might want to exercise some control over which workloads can

run on a particular pool of nodes.

A node taint lets you mark a node so that the scheduler avoids or prevents using it for certain Pods. A

complementary feature, tolerations, lets you designate Pods that can be used on “tainted” nodes.

A taint consists of a key, value, and effect. As an argument here, it is expressed as key=value:effect.

The key must begin with a letter or number, and may contain letters, numbers, hyphens, dots, and underscores,

up to 253 characters. The value is optional. If given, it must begin with a letter or number, and may contain

letters, numbers, hyphens, dots, and underscores, up to 63 characters.

The effect must be NoSchedule, PreferNoSchedule or NoExecute. Currently taint can only apply to node. Here are the available effects:

Removing a taint from a node. Remove from node ‘node1’ the taint with key ‘dedicated’ and effect ‘NoSchedule’ if one exists.

Untaint the node and verify as below:

Untaint the setting on node2