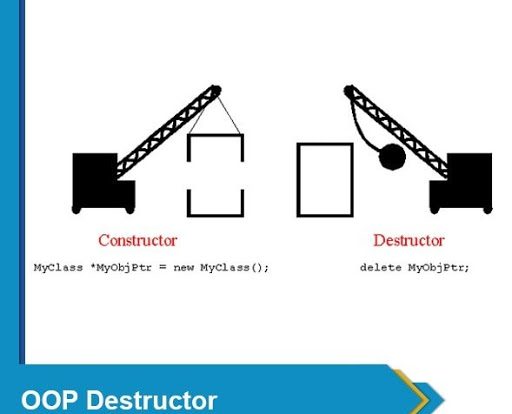 In this Tutorial, we are going to learn about Complete Tutorials of PHP OOP Destructor with Example code. Through this we will learn about the concept about Destructor.  But first let me give you a brief explanation of what is Object-oriented programming (OOP)?

What is Destructor Function in PHP?

Destructor is also a specific member function that is precisely the opposite of the Constructors method and is called if a class instance is removed from the memory. Destructors are methods invoked when there is no reference to an object of class, or when it is deliberately released, or when it is not inside scope (__destruct (void): void).

They have no types or value of return. It’s called shortly after the executing control exits the block before de-allocating the memory for an object, or during the execution of a PHP script.

When all references to a specific object are deleted, or the object is deliberately destructed in any order in the shutdown sequence, the destructor method will be called.

When the whole script or code is finished, global objects are removed. The destructor method will be used to purify your resources before releasing the memory or shutting files once the code no longer need them. PHP Garbage Collector manages the automated deletion of class objects.

Why we Working of Destructor in PHP?

Destructor is essentially controlled by the garbage collector that clears an item if it is no longer necessary. In contrast to the constructor, it cannot take arguments as his input.

This approach is also utilized for resource cleanup and memory free to accommodate more. Overloading with destroyers is not possible and only one destroyer in the same class may exist. Another unusual characteristic of it is that the destroyer is continuously being called even if the script has ceased running using the exit() command. This exit() does not enable stopping the remaining shutdown procedures.

What are the Advantages of Destructors?

What are the Limitations of Destructors?

How to Create a destructor method in PHP?

In PHP, you use the public keyword, then function, then __destruct() to construct a destructor method. The word destruct( ) has two underscores (__).

Step1:- We define and initialize a static $count variable in the first line of this class. The number of objects in the class will be kept in this variable.

Step2:- We make a function method, which is invoked when an object is created. The $type and $year of the car are two parameters that we supply into the function method since the objects represent vehicles. Using the $this keyword, we save the values into the $type and $year variables based on the data supplied in. Then we go to the static count variable and add one to it. This is due to the fact that the function is only invoked when a new object is created.

Step4:- We output that the object is being removed in this destructor procedure. The static property $count also decrements 1. We decrease the count 1 since this variable maintains track of the number of objects in a class, and an object is currently being destroyed.

Step5:- The following is a list of five items that we make to symbolize car. The constructor function is called for each object that is created. This is where each car’s type and year are assigned. It also increases the value of the static $count property, which now has the value of 5. (due to 5 objects).

Step6:- We then use the PHP unset() method to remove the $car4 object. The PHP __destruct() function is automatically triggered when this happens. The item is being removed, according to this function. We also decrease the value of the static $count property 1, resulting in a value of 4.

Step7:- That’s all there is to creating a destructor method in PHP.

Step8:- When an object is removed with the PHP unset() function, a destructor method is invoked once again. It will also be called when a script is finished.

Step9:- That’s all there is to creating a destructor method in PHP.

Step10:- The outcome from running the PHP code above is displayed below.

Comparison between __constructors and __destructors:

Constructors and Destructor methods are incredibly valuable in the actual world of programming since they make highly important jobs easy to code. These enhance code reusability without needless duplication. Even though they aren’t declared in the class, the compiler calls them implicitly. Hope this Will help you.