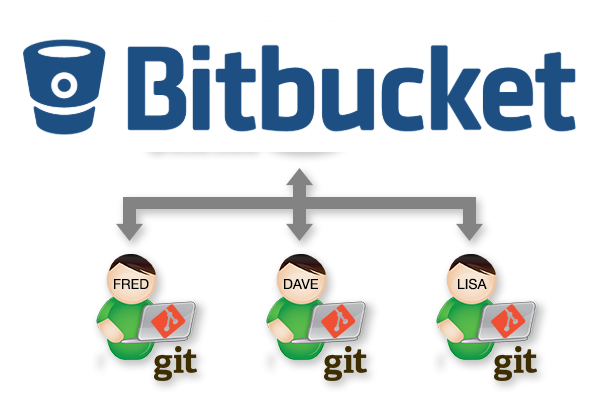 Version Control Systems are tools which help manage the code for a project as it changes over time. They allow past versions of the project to be saved in case new changes break things. Git is a distributed version-control system for tracking changes in source code during software development. It is designed for coordinating work among programmers, but it can be used to track changes in any set of files.

Bitbucket is a web-based version control repository hosting service owned by Atlassian, for source code and development projects. It is similar to GitHub, which primarily uses Git. Bitbucket has traditionally marketed its services to professional developers with private proprietary software code, especially since being acquired by Atlassian in 2010.

Bitbucket Cloud is a Git based code hosting and collaboration tool, built for teams. Bitbucket’s best-in-class Jira and Trello integrations are designed to bring the entire software team together to execute on a project. We provide one place for your team to collaborate on code from concept to Cloud, build quality code through automated testing, and deploy code with confidence.

How Bitbucket tool is helpful?

Bitbucket is a web-based tool that is used for code review. Its main features are the side-by-side difference viewing and inline commenting, which makes code reviews a quick and simple task. It is used together with the Git version control system. Bitbucket allows authorized contributors to merge Changes to the Git repository, after reviews are done.

Why we should learn Bitbucket?

Git Fundamental Tutorials with Basic Demo by Raman in 2020

Git Fundamental Tutorial for Beginners with Demo 2020 — By DevOpsSchool

Git Advance Tutorial for Beginners with Demo (2020) — By DevOpsSchool

Git Advance Tutorial for Beginners with Demo 2020 — By DevOpsSchool

Git Advance Tutorial for Beginners with Demo 2020 — By DevOpsSchool