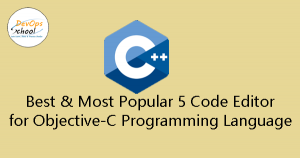 C programming is both very popular and is still actively used in applications and systems around the world. Both these languages ​​are still active among programmers due to their powerful features and excellent security. Because of this, today we are going to list down the top and best C IDEs for developers in 2021 and beyond. Some of these C IDEs and code editors can also be used for C programming.

Sublime Text is a closed source cross-platform source code editor linked with a Python API. It was released in 2008 and was developed by John Skinner and Will Bond. It has a sleek user interface with incredible performance.

Visual Studio Code (VS Code) is an open-source, cross-platform source code editor developed by Microsoft. As an industry-leading code editor, VS Code remains a highly popular tool for development in many languages (not just C++), particularly among Windows users. For a long time VS Code only supported development in Windows, but recently became available for Mac and Linux.

This is another very popular code editor that supports tabbed editing which helps in working with multiple open files in a single window. You can use Notepad++ with Windows and it is super lightweight with some essential features.

It is a desktop text editor for writing C programs. It contains an integrated package manager, which allows you to build your own package, or install new ones. HTML, JavaScript, CSS, and Node.js integration are being used to create it. Furthermore, the atom moves on the electron. This framework is used to build cross-platform applications using web technologies.

Netbeans is a free, open-source, and popular cross-platform IDE for C/C++ and several other programming languages. It is fully extensible using community-developed plugins. Netbeans includes project types and templates for C/C++ and you can create applications using static and dynamic libraries. Additionally, you can reuse existing code to build your projects, and also use the drag and drop feature to import binary files to build applications from the ground up.