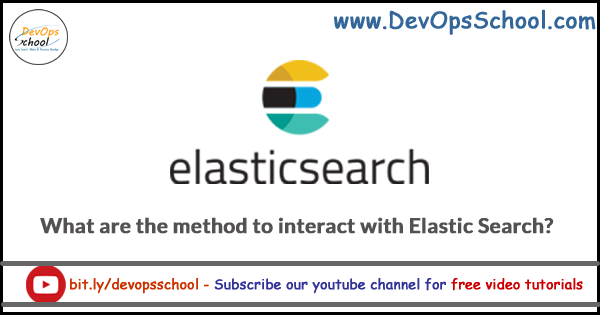 Elasticsearch provides official clients for several languages—Groovy, JavaScript, .NET, PHP, Perl, Python, and Ruby—and there are numerous community-provided clients and integrations, all of which can be found in

There are various following methods which is available…

Details can be found here.
https://www.elastic.co/guide/en/elasticsearch/client/index.html

RESTful API with JSON over HTTPedit
All other languages can communicate with Elasticsearch over port 9200 using a RESTful API, accessible with your favorite web client.

A request to Elasticsearch consists of the same parts as any HTTP request:

The parts marked with < > above are:

In case of Java based, Elasticsearch has been deleloped using Java so Elasticsearch comes with two built-in clients that you can use in your code:

Node client
The node client joins a local cluster as a non data node. In other words, it doesn’t hold any data itself, but it knows what data lives on which node in the cluster, and can forward requests directly to the correct node.

Both Java clients talk to the cluster over port 9300, using the native Elasticsearch transport protocol. The nodes in the cluster also communicate with each other over port 9300. If this port is not open, your nodes will not be able to form a cluster.

Difference between Transport client Vs Node client
The transport client acts as a communication layer between the cluster and your application. It knows the API and can automatically round-robin between nodes, sniff the cluster for you, and more. But it is external to the cluster, similar to the REST clients.

The node client, on the other hand, is actually a node within the cluster (but does not hold data, and cannot become master). Because it is a node, it knows the entire cluster state (where all the nodes reside, which shards live in which nodes, and so forth). This means it can execute APIs with one less network hop.

Similarly, if you need to create thousands of connections, you don’t want to have thousands of node clients join the cluster. The TC will be a better choice.

On the flipside, if you need only a few long-lived, persistent connection objects to the cluster, a node client can be a bit more efficient since it knows the cluster layout. But it ties your application into the cluster, so it may pose problems from a firewall perspective.

Good Read can be found here as well
https://stackoverflow.com/questions/15398861/elasticsearch-nodebuilder-vs-tranportclient